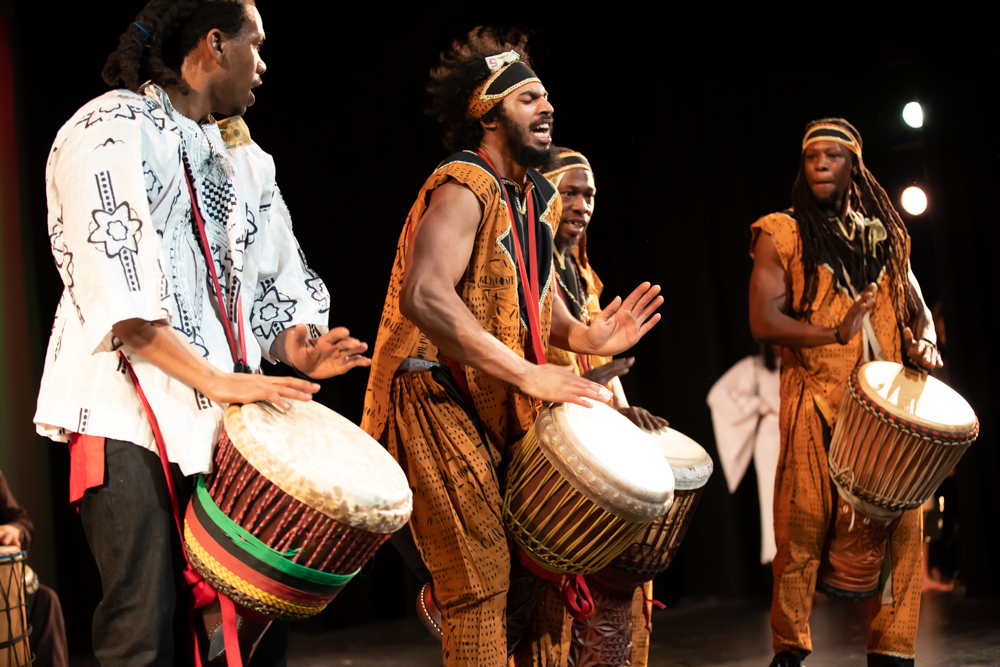 Presented at Symphony Space, the performers of Asase Yaa African American Dance Theater grabbed me immediately with their exuberance and enthusiasm. The dancers, backed by the intense rhythms of African drums, told a thread of a story using mime and movement. Conceived, directed and choreographed by Artistic Director Yao Ababio, it is a universal tale, easily understood, about a young woman and her romantic choices. The charming actor/dancers were N’dack Fleming as The Young Girl, Kweku Sumbry as The Drummer, Lamar Diop Coard as The Dancer, and Maimouna Kane as the caring Big Sister. 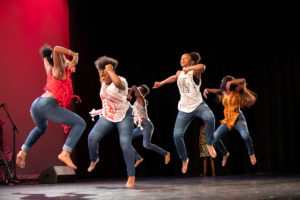 Junior dancers from the Asase Yaa School of the Arts in a scene from the African American Dance Theater’s production of “Drum Love” (Photo credit: Solwazi Afi Olusola)

The two suitors vie for her attention – one with his dancing, the other with his drumming. Her father turns away both. Neither is good enough for his daughter. But as time passes, shamefully, she discovers she is pregnant. But who is the father? Of course, the girls in the town gossip about her until one of the suitors takes responsibility. And then, there is a happy ending with a white wedding.

The colorful African-inspired costumes were designed by Smokin Mirrorz (that’s the name in program.) The only thing that was subtle about this performance was the lighting by Melody Beale, occasionally changing color and intensity.

Adding quality to the performance were the especially fine guest artists, Famoro Diabate who played a xylophone-like instrument, Wunmi on the drum, and Missia Diabate whose strong, vibrant voice filled the auditorium. They are included, by the way, on the 2014 album, “Drum Love.” The title song, “The Love,” was used by Ronald K. Brown in his critically acclaimed ballet “The Call,” currently being performed by the Alvin Ailey Dance Company.

The Brooklyn-based Asase Yaa Cultural Arts Foundation is the source of the dance touring company, which has been performing all over the world for the last 18 years. Its mission is to promote Black Culture from its African and/or Caribbean roots, and some of the performers were the children from the Foundation’s cultural performing arts program. Perhaps the highlight of the evening was the appearance of boy drummers whose fierceness no doubt was motivated by the Zulu warriors mentioned on their tee shirts.

This dance troupe is firmly inspired by folk tradition. Their homespun quality is not an example of a ballet or modern dance version of African dancing, but the spirit-lifting movement of a community working together. Part of the tradition is the audience’s response. There was hooting and hollering from the audience, sounding like they were at a rock concert, but it was impossible not to get caught up in the enthusiasm. The general raucousness was a display of the clear delight that the audience enjoyed. It created an atmosphere of unbridled joy and who could resist? Everyone was smiling and laughing and clapping. 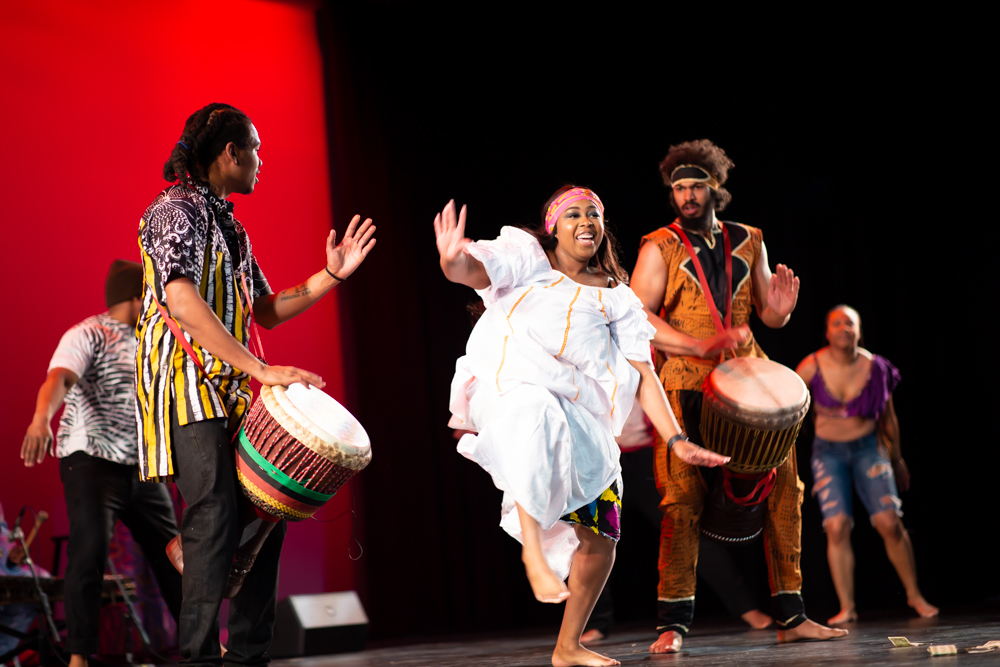 The performance was a fund raiser, and surprisingly, people literally threw money onto the stage, and sometimes jumped onto the stage to stick a bill onto the sweaty brow of a favorite performer. As much as what was happening on the stage was the total experience which was just so much fun!

If you prefer the careful, serious professionalism of trained dancers, this group may not be to your taste, but if you’re up for boisterous fun, consider the Asase Yaa African American Dance Theater

A REVIEW FROM Playstosee.com

The atmosphere in Symphony Space on February 2 was like that of a school concert, where the audience is filled with friends and family proudly watching their loved ones perform. At Drum Love, everybody became friends and family the minute they stepped through the door.

There was a response of such visceral delight to the entire production, beyond anything suggested by the mere description in the program. The show’s story wasn’t anything particularly unheard of: a young woman in Africa (N’dack Fleming) falls for and pursues two men she meets there despite her family’s warnings. She becomes pregnant and initially fears shame, but she eventually discovers that her family will support her regardless. A classic tale of love and acceptance – nothing revolutionary, right? But the way the performers, through music and dance, delivered that tale – as a force of unity, as an exhibition of unwavering passion – made it extraordinary to witness. No, not just to witness. To be a part of. Drum Love was created as a contemporary tribute to traditional African culture, but the cultural foundations it emphasizes are values that can move anyone: love, acceptance, family. 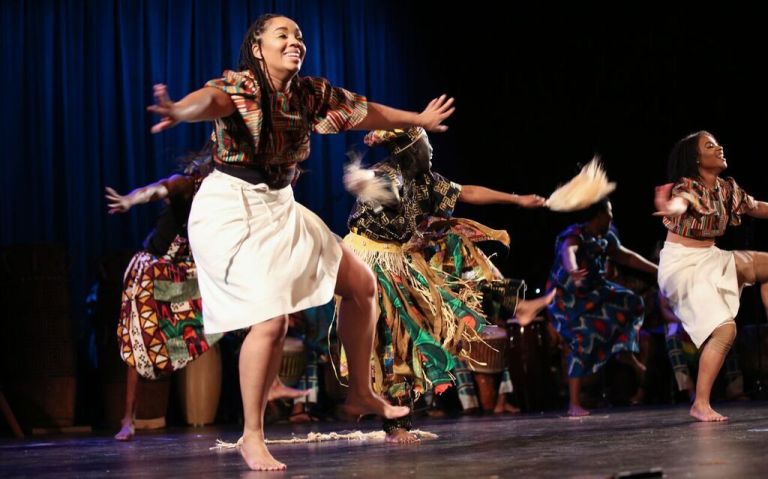 And moved people were. The rousing cheers and applause were so constant that they became like another layer of background music above the actual orchestra onstage. But it wasn’t disruptive; rather, it supported the music almost naturally, as though the show was conceived to invite such celebration and connection from the audience. Perhaps it was, and it worked. There wasn’t a moment where the pace of the music felt out of step with the concurrent dancing, or the tone didn’t seem to match the mood of a scene. In equally perfect sync, the audience responded as though rehearsed to the moments of excitement as the woman found herself intrigued by the men, tension as they met the woman’s parents, worry as the men debated who fathered her child, and triumph as her family ultimately rallied around her.

The drums in particular (as expected, considering the title) stood out as a character all their own. In place of dialogue, the players conversed, beckoned, bantered, argued, and flirted in drumbeats. The drum played by one of Fleming’s suitors (Kweku Sumbry) manifested his confidence and swagger. Act 2 opened with a “drum call” featuring a group of youth playing their instruments with such intensity, the theater all but shook. The number didn’t advance the plot, but it was a nevertheless powerful moment that heightened the feeling of love in the room and thrust it upon the audience (who replied with a louder chorus of applause than for the rest of the show combined).

The show was put on by the Asase Yaa African American Dance Theater, and the dancing truly drove the show. It had the two major marks of a well-choreographed piece: it successfully told a story without needing words, and it inspired an emotional response. Every move was clearly imbued with fervor and purpose. The full-cast “Doundounba” number, in which the young woman first meets the two men, was particularly striking for how it portrayed the buzzy excitement of a modern party while maintaining the integrity of African dance.

Drum Love champions love for the sake of love and dancing for the sake of dancing. It celebrates the preservation of a rich cultural heritage and finding in it, at least for the two hours when the African drums set the pace of your heartbeat, infectious and unbridled joy.