We are pleased to be able to offer several of our most popular live theater productions and musical compositions for licensing. We own 100% of the usage rights and ownership to all content listed herein. If you are interested in licensing any of the material, please scroll down and fill out our Licensing Request Form.

Please allow 7-10 days for us to respond. 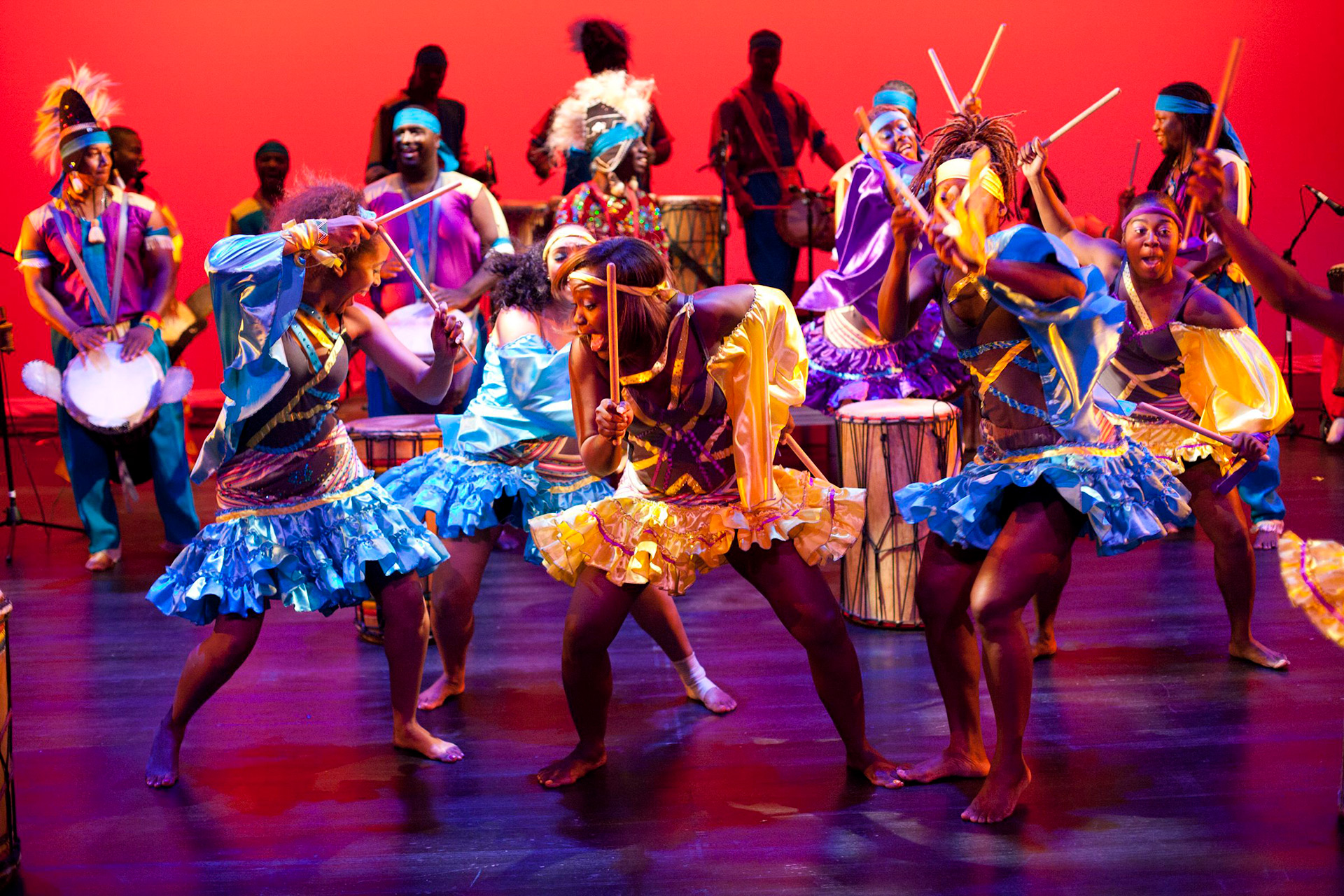 The African-American Dance Theater offers all its major concert productions (see list below) in multiple formats. The standard presentation is a two-hour concert performance that features our full company ensemble, costumes and staging elements. We also offer an abbreviated performance in a one-hour format that features a smaller company ensemble for each of our major productions.

If you’re interested in either format, please specify as requested in the Licensing Form. Our performance rider (which includes our technical requirements (sound, lights, staging) is available upon request.

‘Drum Love’ is a classic love story, rites of passage, and coming of age tale complete with a tragic heroine, suitors, and concerned family. The work follows the time-honored format of African ballets expertly produced by the touring national companies of West African countries.

Conceived, choreographed, and directed by Artistic Director Yao Ababio, ‘Drum Love’ tells the story of a young girl who falls for three artists of The Big City. She ignores warnings to avoid them and becomes involved with all three. Eventually she gets pregnant, is rejected, and realizes that she has created a situation that will bring shame to her family. In the end, she embraces the support of her family and friends. Incorporating dance, song, and live music, the completed work will engage audiences with the excitement and vigor of African dance while presenting an urban twist on traditional themes.  It will be performed by 7 dancers, 5 drummers, and a traditional Malian band.

GHANA: THE PLACE WHERE THE CHIEF SLEEPS

This is a story about a high priestess representing Asase Yaa (mother goddess earth) who was in control of all of the Animals and the four elements that made her complete: earth, water, fire, and wind. Two spirits, representing the balance of mankind the male and the female initiate, walked with her. When it was time for the high priestess to groom and teach a young boy who was to be a great chief the ways of the world, she taught him about the four elements and gave him special powers – of strength, vision and leadership.

The high priestess takes the young boy on a journey filled with adventures, disruptive interference by scavengers, and along the way she is also stripped of her powers, becomes an abused and powerless evil spirit. She is saved, is reunited with the young boy who becomes an adult Chief. The chief and his warriors prepare to destroy the evil spirit completely but in true regal and divine form, Asase Yaa spares the spirit and explains that reform and upliftment are best.

DJEMBE IN THE NEW MILLENNIUM

Djembe in the New Millennium pays homage to the history and culture of Asase Yaa African American Dance Theater, and the next generation of traditional and contemporary African dance and music. The work  showcases the progression and experiences of the life of Djembe in modern day New York City. It features the rhythms and dances derived from Guinea, Mali, Senegal, and Brooklyn, NY. It also historically chronicles significant moments in the evolution of  West African drumming and dance in New York City which has been a Mecca where artists of the genre continue to meet, exchange, and celebrate legacies old and new.

“An Ananse Tale,” was created as a vehicle for our theater company to teach African culture the community at large through a method of storytelling used amongst the Akan of Ghana, West Africa for centuries. The narrative for the Ananse stories are driven by a wide range of African dance and music styles from all over the Diaspora including Ghana, Guinea, Congo, Haiti, Cuba, Nigeria, Senegal, and African American art forms.

“An Ananse Tale,” is the first original work that our theater company self-produced, and this year marks its 10th Anniversary. Executive Director K. Osei Williams and Founder and Artistic Director Yao Ababio conceptualized this performance in 2006 and finished the full concept in 2008. The full concert was performed at Kumble theater November 2008. This performance shows Ananse as a trickster, manipulator, and divisive figure. The community with the help of Nyame (Sky God) and Asase Yaa (Mother Earth) show Ananse these divisive antics could never gain you respect or power.

It has been presented in several renowned venues nationally and internationally including:

Our children’s productions have been presented in schools throughout the greater New York metropolitan area. The productions and casts are designed to fit normal school auditoriums. We offer a diverse range of musical and dance driven productions in several different presentation formats including 30 minutes, 45 minutes and 1 hour in length.

“The Hip Hop Kingdom” is a story about Jaquan Smith, a young man who wants to be a rapper, but allows negativity to influence his style as a rap artist. Jaquan has had a difficult life, with an absentee father, negligent mother, and growing up surrounded by poverty, and he expresses these negative experiences in his music. He is taken under the wing by the iconic elders of the hip hop community who take him on a journey through The Hip Hop Kingdom to show him that there is a better way to express himself through rap. The elders expose him to hip hop’s rich history of delivering a positive message.

It pays homage to the global Hip Hop movement as unique and culture-shaping genre that was initially developed in New York City in the early seventies. Students will learn about the four pillars of hip hop, rapping, DJing, dancing and graffiti art, and explore the history of hip hop as a medium for social protest and community building.

The children of the great Ancient Africans will present historical moments in Hip Hop music and culture. They will portray some of the most influential artists within the Hip Hop community and share how they positively impacted this art form for generations. Some of Hip Hop’s most influential artists, past and present,  will be feature including; Afrika Bambaataa, Run DMC, Queen Latifah, MC Lyte, Salt-N-Pepper, Public Enemy, P. Diddy, N.W.A., Notorious B.I.G., Tupac, Jay Z and Missy Elliott.

The story also  highlights some of the negative influences that the music industry has traditionally tried to impose on those who listen to this music genre, despite of its initial positive and transformative mission.

Wale and the Cocoa Village

This is a fictional tale about an evil villain Nii kwei Volkoth Cocoa who owned all of the cocoa in the world and also wanted to own all of the candy in the world too.. A young “Super Hero” named Wale receives special powers from the Mother goddesses and the great cocoa tree to defeat the evil villain and all of his counterparts. The tale’s lessons are to; teach youth to address the acts of selfishness, greed and gluttony, promote unity and stress as well as the importance of respecting the knowledge of our elders in the community.

This is an entertaining and fun show about the great scientist and inventors of African descent in America. The lead character, self-proclaimed great scientist,  Dr. Alolushish takes on audience on a journey back in time by acknowledging influential scientists and inventors who contributed significantly to changes in the world. It also sheds a light on the many adversities these African American scientists faced and how they endured and were still able to create, develop, and make change in the world. The play is also designed to expose children to the many ways science and inventions have impacted and affected our world.

This play is based on an old folktale from Ghana West Africa. Ananse the Spider is one of the great folk heroes of Africa. He is a rogue and mischief maker, who is also a wise, lovable creature who triumphs over larger foes. In this story, he tells all of the animals of the forest that Nyame (Sky God) gave him all of the power to heal any creature in the world. The animals believe him until Nyame comes back to the earth and tell the animals the truth. The animals rebel and to get back at Anase for lying to them, they devise a plan to trap Ananse to live forever in his own web. The play’s message to youth is that telling the truth is always better than telling lies and it’s never good to gain power through deception.

Mansa Musa was the richest man to ever live. He was a Mandingue king from the empire of Mali. The play retraces the great pilgrimage he made to Mecca, the holy land of all Muslims. During his pilgrimage he gave most of his wealth to people he came across. When he got back to his Kingdom he built a university and library called Timbuktu. The play was inspired as a way to teach students self-pride and self-dignity, the rich history of Africa and expose them to authentic stories about African Kingdoms.

We offer a series of special conceptually themed workshops such as, “Dancing Through Africa,” Rhythm of the Drum,” Kwanzaa Time,” “Djembe Day,” and “Hip Hop vs African,” among others. Our most popular workshop is a 30-45-minute “edutainment” variety show that features live performances of indigenous African songs, music, dance, along with educational insights about African history and folklore. All of our workshop experiences also include an interactive audience participation component as well. We have presented numerous workshops to schools, conferences, seminars and festivals since our inception. 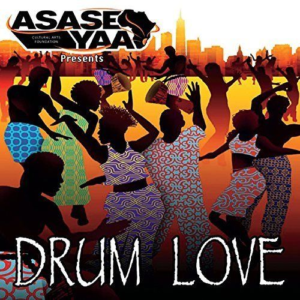 Listen below to selections from “Drum Love”.

Note: All questions regarding fee requests and budgets will be taken into consideration, but the submission does not guarantee that Asase Yaa will be able to honor the requests. All licensing requests will be carefully reviewed. Please allow adequate time for us to respond. All requests are handled in the order they are received.