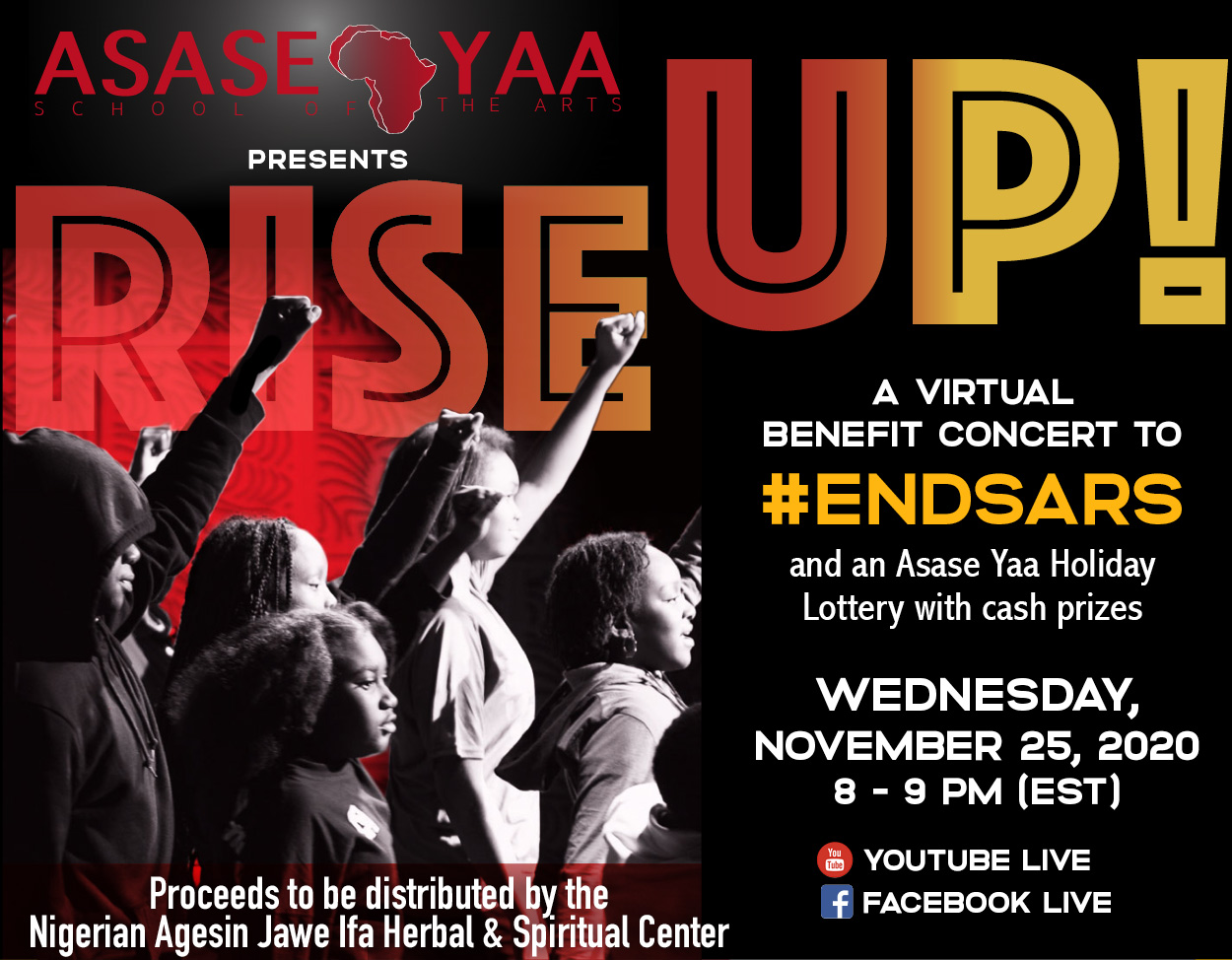 “Rise Up!” is a one-hour taped concert, featuring African inspired music, dance, and words and will premiere on YouTube and Facebook Live at 8 pm.

Funds raised from the benefit concert are being distributed by the Nigerian-based Agesin Jawe Ifa Herbal & Spiritual Center to grassroots community organizations who are leading the efforts to #EndSars and provide legal aid to victims of police brutality throughout the country.

Zakiya Harris, the Artistic Director of the Asase Yaa School of the Arts, will serve as Host of “Rise Up!” Featured guest performers will include the Asase Yaa Youth Ensemble, Chief Sekou Aláje, internationally known Senior Priest of 256 Healing Arts and The Ogundáse Ifa Temple (based in East New York), who specializes in holistic mentoring and teaching to attain spiritual health, Brooklyn-based CHIEF AYANDA CLARKE, and THE FADARA GROUP MUSIC COLLECTIVE, is a noted Grammy Award-winning master and world-class percussionist, business leader and arts educator, and Weedie Braimah and the Hands of Time, who exemplifies forkloric West African music tradition, evolution, and soul, Ghanaian actress Luckie Lawson, Diallo Sumbry of the Adinkra Group, and Chief Baba Fakayode Faniyi Agbongbon Awo of Osogbo, Nigeria. 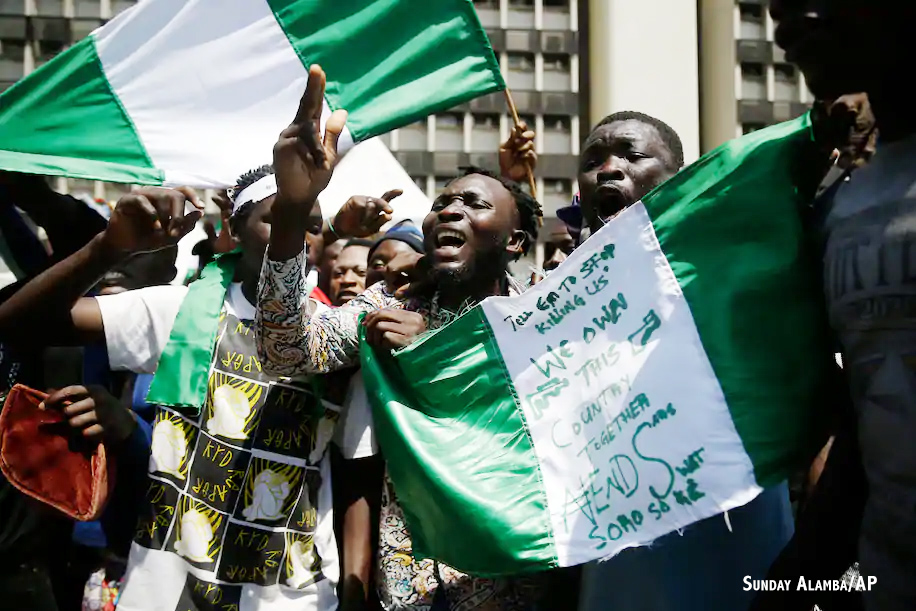 In December 2017, Segun Awosanya spearheaded an online advocacy campaign demanding an end to SARS brutality in the country. The campaign started on social media from the hashtag #EndSARS, created by Twitter user @Letter_to_jack in a post demanding Nigeria’s government scrap and end the deployment of SARS.

After widespread protests in Nigeria and worldwide under the motto “End SARS”, the unit was disbanded on 11 October 2020. Inspector General of Police M.A. Adamu said that a new unit, the Special Weapons and Tactics (SWAT), would replace the SARS. Within hours of the announcement, some Nigerians took to Twitter with the hashtag #EndSWAT, and demonstrations continued amid fears that police reform would not materialize.

On the night of Tuesday, 20 October 2020, at about 6:50 p.m., members of the Nigerian Armed Forces opened fire on peaceful End SARS protesters at the Lekki toll gate in Lagos State, Nigeria. Infamously named Black Tuesday, the massacre at Lekki punctuated more than two weeks of protest of police brutality in Nigeria. The hashtag #EndSARS began trending (again) on social media on Oct. 4. The immediate trigger was a video that showed a SARS officer shooting a young motorist in Ughelli, in Delta state, then pushing his body out of the car and driving off with the dead man’s Lexus SUV. Within days, crowds of young people gathered in Nigerian cities to demand the abolition of SARS.

This year’s protests follow on previous activism and government announcements that SARS would be demobilized in 2014, 2015 and 2017. And yet, SARS officers continued to act with impunity, committing armed robberies, rapes, other acts of torture and extrajudicial killings like the one in Delta State. Since the protests began, estimates are that at least 100 individuals have lost their lives; 48 of whom were killed on Black Tuesday alone. 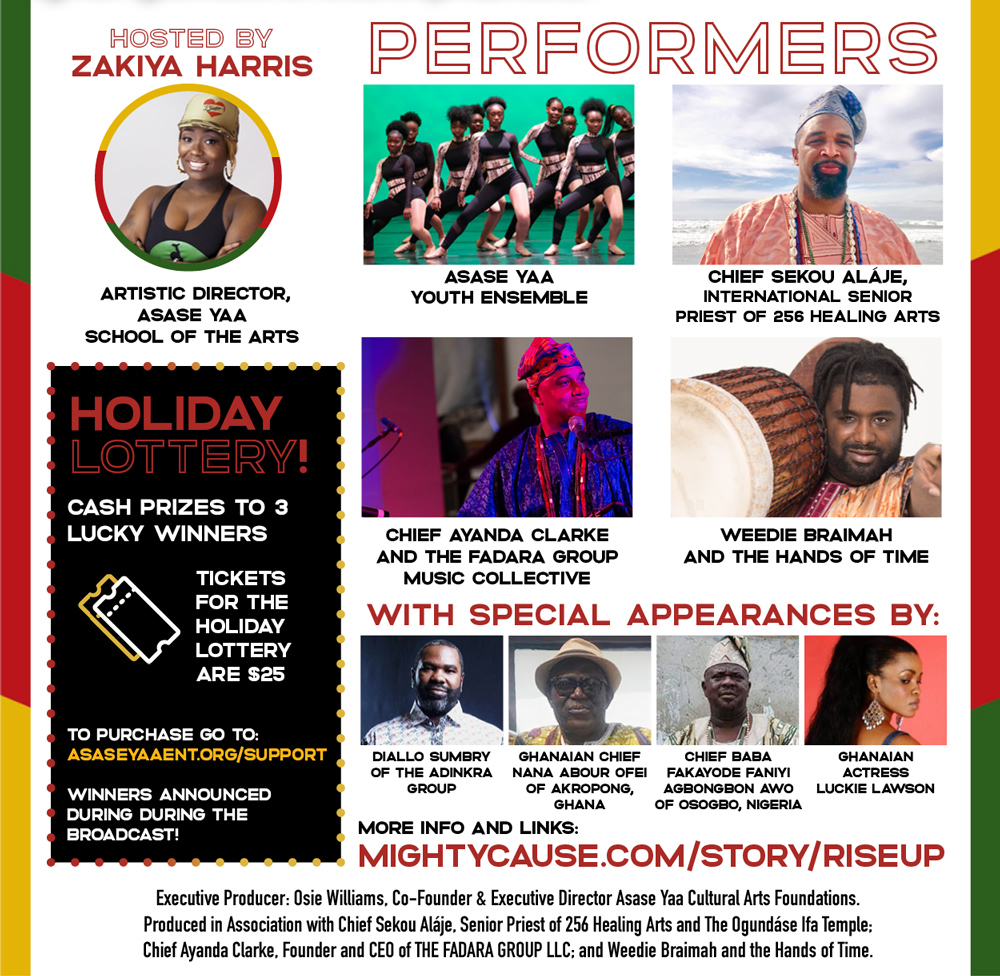 “We at Asase Yaa continue to challenge our students to be global citizens and use their artistic voice to speak out for social justice, unity and equality in our communities and around the world,” explained Ms. Harris. “Our mission is to inspire solidarity with our brothers and sisters everywhere, and reinforce we are in this fight together. We Are One!”

Donations for the #EndSars event fundraising are being accepted for a minimum of $5.00 and increments of $15, $25, $50, $75, $100, and any amount above. Donations are being accepted through Christmas Day. To donate go to: mightycause.com/story/Riseup 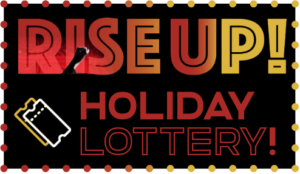 In addition, Asase Yaa has created a lottery to provide three (3) lucky winners with some extra cash to help get them through the holiday season. Lottery tickets are available for purchase for $25.00. The winners will share the total amount of funds raised from ticket sales. They will announce the winners during the digital broadcast. There is no maximum purchase amount on lottery tickets. To purchase lottery tickets go to: asaseyaaent.org/support.

The Asase Yaa Cultural Arts Foundation, a non-profit organization which has been a revered leader in the Brooklyn community over the past nineteen years, founded the School of the Arts. Osei Williams, the organization’s Co-Founder and Executive Director will serve as Executive Producer of “Rise Up!” It is being produced in association with Chief Sekou Alájé of 256 Healing Arts, Chief Ayanda Clarke and the Fadara Group, and Weedie Braimah and the Hands of Time.

The Asase Yaa Cultural Arts Foundation, a non-profit organization which has been a revered leader in the Brooklyn community over the past nineteen years, founded the School of the Arts. Osei Williams, the organization’s Co-Founder and Executive Director, will serve as Executive Producer of “Rise Up!” It is being produced in association with Chief Sekou Alájé of 256 Healing Arts; Chief Ayanda Clarke, Founder and CEO of THE FADARA GROUP LLC; and Weedie Braimah and the Hands of Time.